The Art of Mehndi 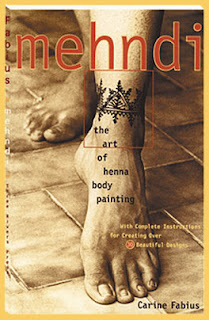 My friend Peggy is the procurer of fabulous junk. Actually to me, it's more like treasure. I've talked about her before in my blog posts...giving the me the great box of old buttons. She's also been known to leave old books and bags of glitter and beads on my doorstep, or call and say "Hey, guess what I found, and I thought of you!".
Peggy called the other day to ask me a question. During the course of the conversation she told about how much fun she was having with her daughter and her friends doing henna tattoos. Serindipidous or not, I had just taken a book out of my reference library that I had on Mehndi. I had been practicing illustrations in my sketchbook during the evenings, eventually hoping to use some of the patterning on a Mandala I was working on.
On thing lead to another. I told Peggy I would copy some of the illustrations down and send them to her so she could use them on her daughter. I leafed through the book. Small book, but way to much information to copy and send to her. The descriptions of how to use the henna paste and the skin preparation tips alone were just fascinating.
I decided since Peggy is always so kind to me, I would go on Amazon and just have them send her a copy of the book to her as a gift. Deal done. She now has the book, loves it, and I know exactly what she will be doing with her daughter this below zero weekend!
Mehndi is the art of henna body painting. It has been practiced for five thousand years throughout India, Africa, and the Middle east. Preparations for painting the body are made from the crushed leaves of the henna plant. Whether it is done for for a celebration or special event, it is done with the intension that the act would engender good fortune, good feelings and happy results.
"Mehndi" by Carine Fabius, published by Three River's Press is digest size, 112 pages long. The book is divided into three sections, explaining the history and traditional uses of the plant, Mehndi application, and technique exercises. It's available at Amazon, both new and used.
Whether you are interested in adding it to your art or craft reference library...or simply just want more information about the application of henna, I'd check this one out. It's a little gem.

Posted by Diane Fergurson at 8:18 AM