We'd like to thank Grace  for this great blog contribution!  Enjoy! 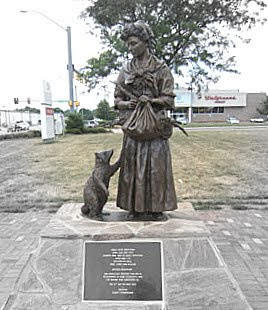 Do you live near a real witch? I do. Grace Sherwood - The Witch of Pungo, Virginia. Grace.....no relation to me Grace, I promise but I think I do have the potential to be a great witch!

More than 300 years ago, Grace Sherwood was accused in 1698 of bewitching; ruining a neighbor's crop, killed livestock and conjured storms. She was* trailed by water* by the Virginia Princess Anne County government on July 10th, 1706. They tied her thumbs to toes and dropped her into the Lynnhaven River near what is now known as Witchduck Point. I live only a few minutes from Witchduck Point. You can see her bronze statue placed at Bayside Sentara Hospital on Witchduck Point Road.

Well, back to the story, Grace Sherwood floated back up the water a sign of guilt.
That was considered proof she was guilty because the pure water cast out her evil spirit, according to the belief system of the time. If you were a witch, you would float and would not die. If you sink and drown, then you are a mortal and innocent. She was put into prison was eventually released. She lived quietly until 80.

Was she into witchcraft? Her neighbors thought so. They thought she was a witch who ruined crops, killed livestock and conjured storms and had taken her to court many times. She was also accused of using her powers to cause a neighbor to miscarry. Even though she was actually known as a healer... using the herbal crops that she grew...and a midwife who loved children and animals.

"I be not a witch. I be a healer," said Sherwood according to historical record. "Before this day be through, ye will all get a worse ducking than I."
Told you I love living so close to this legendary witch :)


Thank you so much for reading
Grace

Posted by Diane Fergurson at 6:21 PM