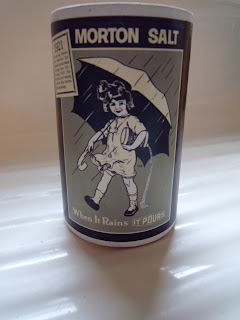 Well, Spring is here - May 1st and I had my Beltane blessed by a group of tiny black ants that waited for me in the kitchen trash can this morning when I opened the lid.  For years and years we had never experienced any ants in the house, although I heard my neighbors complain annually about small infestations that invaded their kitchens every spring.  Then, a few of years ago the people in the house behind ours decided to tear down a very old garage that had been on their property.  That's when our adventure with the ants began.

Whenever you disturb the earth, things change.  And it's not always in the form of erosion or drainage issues.  What is in the earth 'comes forth' and most of the time you don't know what that's going to be.  In the urban area where we live, there are pockets of bugs and ants have been laying dormant in the ground for years.  They have been undisturbed because the properties have not been touched since the houses were built.  In our case, over 100 years.  To compound the problem the houses are built close together, so if the ants are bothered and displaced then everyone who lives in the adjoining properties are effected.

There is a friend of mine that lives across town who started experiencing problems with ants shortly after she purchased her home.  What happened?  Their next door neighbor decided to enlarge their house, dug down into the ground to pour a new foundation, hit a pocket of ants, and my friend and others who live on her block have been literally plagued with ants ever since.

At our house when the garage was torn down behind us, not only did the ant problem start - but there was also some kind of fungus and scale that was unleashed.  It wiped out all of our gardens that year (flower, herb and vegetable).  No remedy, natural or purchased, could even touch it.  So unfortunately we've had to make the choice of having the roses professionally sprayed every spring since, or loose them entirely.

Anyway, back to the ants and the salt.  Last year I was trying just about method I could fine to get rid of the ants - short of calling in an exterminator.  I mentioned the problem to my son and he told me to try using salt.  Salt?  Really?  Yes, he went on to explain that if you find out how the ants are getting into the house and lay down a line of salt - they will not cross it.  I tried it and he was right.  If the ants touch the salt, they shrivel up.  And if they sense that they are nearing the salt on the ground, they nervously scurry in the opposite direction.  Absolutely amazing. 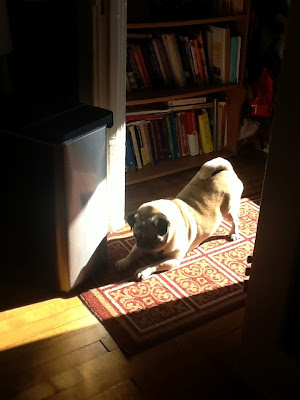 Well, this spring we have next door neighbors who are having an old oil tank removed from the ground on their property.  The earth will be disturbed once again.  The ants and bugs that are living in their yard will be dispersed and will undoubtedly move some place else - hopefully not into my house, but we'll see.  Earlier today I sprinkled some salt under the trash can after my ant friends bade me 'good morning'.  I also laid a line of salt down outside the entrance to the back door.  Of course my pug Buddy proceeded to lick up the salt as soon as I put it down - some days you just can't win.  Over twelve hours later though (after I reapplied the salt due to Buddy) still no ants.  Can't beat that!

Posted by Diane Fergurson at 5:42 PM