The Mind Body Spirit Odyssey is very pleased to have the opportunity to review two excellent new DVD's that True Mind is releasing this month from Master Jian Liu Jun, Doctor of Traditional Chinese Medicine and Professor of Traditional Chinese Medicine at Guangzhou University.  Master Jain's career is long and highly respected.  His credentials are extensive.  Master Jain is the Vice President of the Guangzhou Shaolin Qi Gong Association  and represents the Center of Chen style Tai Chi Chuan at Chenjiagou in Europe.  In addition, he is also the Head of the European branch of the International Da Cheng Quan Association. 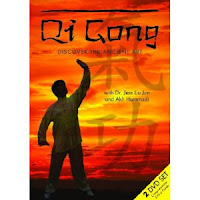 Qigong - Discover the Ancient Art is a two disc guide to learning and understanding the basic techniques associated with the 4,000 year old Chinese practice of breath alignment, movement and energy awareness that is used for healing and meditation.  Qi Gong is also practiced as a form of preventative medicine and is an effective method for self discovery and understanding. Rooted in Taoist philosophy, it is not only widely practiced in China but worldwide.  It has, however, only recently started to gain any kind of momentum and popularity within the United States.

As explained in the DVD's there are five different types of Qi Gong practices and studies.  Taoist, Buddhist, Confucianist, Martial Art and Medical.  This DVD covers Taoist style, with some Buddhist practices included. Besides an outstanding introduction to the Qi Gong practice tradition, it's historical roots and philosophy in Traditional Chinese Medicine; the DVD gives a very detailed explanation and demonstration of the 18 Tai Chi Qi Gong Exercises, the 8 Pieces of the Brocade and the 5 Animals. 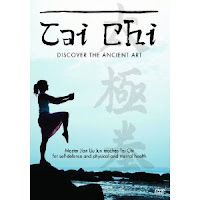 In Tai Chi - Discover the Ancient Art, Master Jain focuses on Spiral Movements, which form the basis of all Tai Chi Chuan. He focuses on these movements as he teaches and fully explains the Yin Ying, Yin and Yang, the Five Elements and the Eight Trigrams.  He also demonstrates Spiral Movements and the Figure 8.  Although Tai Chi and Qigong developed from from the root and Tai Chi is often referred to as a form of 'meditation in motion' by it's deceptively soft style, the primary difference between the two practices is Tai Chi is a martial art.  This is very evident if you watch both DVD's and note the similarities and differences between the two.

Both the Tai Chi and Qi Gong DVDs were filmed at the Garden of the Bronzes at the Coubertin Foundation in Saint-Remy les Chevreuse, France.  The setting is just stunning.

I have viewed numerous Qi Gong DVD's over the years, both out of curiosity and also as an addendum to my own continuing studies.  I can honestly say that I found Master Jian's detailed instruction and presentation of the information relating to Qigong, it's philosophy, roots and connection to Traditional Chinese Medicine to stand head and shoulders above the rest.  The presentation of the information is easy to understand, but the content is also very thorough and it does not cut corners.  I also appreciated some of the more subtle aspects of the production.  As a true "master" would, Master Jian is not glamorized or presented as the "star" of the production, but rather in a more background role.  The DVD is edited so that the shots rotate between Master Jian and an additional instructor, Akli Hammadi, a well seasoned instructor who serves as a federal monitor for the Tai Chi Chuan and Qi Gong Federation.  There are also beautiful shots of Hammadi's class being conducted at the Sculpture Park in France, and visual references to illustrations of the anatomy and meridians as each movement is demonstrated.  A British woman with a very pleasant, lovely voice is the narrator for the DVD, which provides the perfect balancing Yin energy to balance the presentation.

The Tai Chi DVD follows a similar format, although there is one disc instead of two.  The narration is provided by different British female whose speaking voice, although more intense and sharp, once again complements the martial energy which is inherent to the Tai Chi tradition.  The instruction of the movements is once again very detailed, but easy to understand and follow.

Although Qi Gong is slowly becoming more widely practiced and studied within the United States, in most locations proper instruction and traditional education is still very difficult to find.  To a lesser extent, this is true of Tai Chi Chaun too.  Both of these DVD's provide a very much needed, more thorough education and instruction to both traditions.  Whether you are currently practicing and studying Qi Gong and/or Tai Chi Chaun, or have an interest in just learning more about them, I would highly recommend obtaining a copy of these DVDs.  They will both be available on Amazon beginning August 14.

From Jing to Qi to Shen:  An Interview With Healer Darren Orr

The Importance of Being

Posted by Diane Fergurson at 1:57 PM