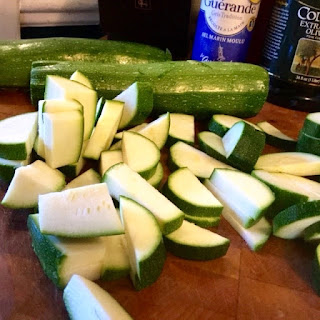 As I was chopping up some zucchini for dinner last night, I realized that summer is finally here.  Zucchini always reminds me of summer.  Both my mother and grandmother grew it in abundance in their gardens.  My mother would cook constantly with the massive amounts that we would harvest. She served it as a vegetable, but also made zucchini bread, which was definitely considered a new, fairly exotic item during those times (at least in the Midwest). I considered zucchini bread to be a real treat because my mother was such a “no sugar” healthy food advocate.  Sugar rarely passed my lips as a child.

My grandma, an immigrant from Italy, would also cook with zucchini when it was in season.  She would make it for literally every meal.  "You eat what is in season and in the garden," she would say.  Sometimes she would use some of her zucchini to work into the antipasto she canned during the summer.  Other than that we ate our fill and gave away bags and bags of it to the neighbors.  I got really tired of eating zucchini at her house.  I still have it memorized…  "Saute a little butter with a little onion, add a fresh sage leaf from the garden, cover, cook on low until it sweats."
Al dente.  Of course, she was Italian.

Right after it rains - if you have been lucky enough to have rain this summer, or not battling the horrible floods - the summer days bring a humid, lush feeling like no other.  Although I'm pretty notorious for disliking the heat immensely, I do definitely respect and appreciate the season.  Yes, zucchini flourishes in the summer.  Everything seems to flourish in the summer.

This year it seems to be our urban backyard that is flourishing.  Two overly active birdbaths.  A mother rabbit plus her little bunny baby, and this year the biggest surprise of all, a mother cat and her two orange kittens.  Nothing like opening the back door at 6am and finding two orange little balls of fur fast cuddled up in the chair - wide eyed and surprised.  My husband said "at least they're cuter than squirrels (which we also have in abundance).  Maybe they'll even help keep the mice away."  My neighbor says all the activity is due to the “good vibes” radiating out from our backyard.  Other friends suspect the fairies in the rose and herb garden.  I think it's because they all know they are safe and we will not hurt them.

Of course throughout all of this, our two sweet old rescue pugs snore their day away.  The third rescue, Franky, remains on high alert.  So I guess I'll be outside clapping and banging before we let him out.

Enjoy your July.  Take some time to observe and love your own backyard.  You might be surprised what you find. 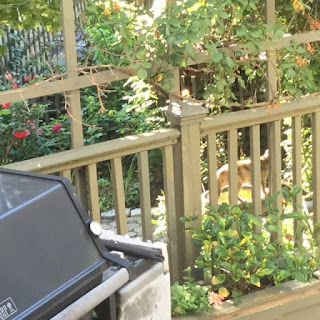 Posted by Diane Fergurson at 1:33 PM