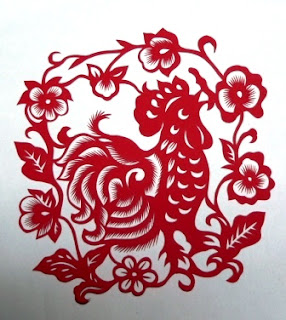 Chinese astrology is considered to be one of the world's oldest forms of Astrology.  Unlike the other Moon-school traditions; Tibetan, Vedic and Judaic, which are couched in religion, Chinese astrology is purely secular, a direction shared by Sun-school astrologies (Western and Arabian).

Although there are general behavioral patterns associated with the Rooster (chi') sign, the delineation is further augmented according to which element (earth, metal, fire, water, wood) happens to be in control the year that you are born.  For example, the personality of a fire Rooster is different from that of a wood Rooster etc.  So, just because you are a Rooster (chi') in Chinese astrology does not mean that this is your year.

In general, the Rooster (chi') is very intelligent and honest.  They also possess an excellent memory.
He or she can be quite a showman with much vanity, and possesses remarkable candor.  This person can also place too much emphasis on the trees, instead of the forest so to speak.

The fire Rooster is a highly motivated, single minded person.  They can become almost fanatical when it comes to investigation and details.  This can cause problems with coworkers who do not have the same work ethic or are not very conscientious about their work and work habits.

Although in 2017 fire Roosters will have to work hard and be patient to achieve their goals, they will also experience a surge of productive energy in order to do so.  Expect a lot of mental activity.

The color for 2017 is red, although it is not advised to wear things that are red.  Instead, concentrate on colors that complement red or calm red.

*Information for this post was taken from Miller and Brown's "The Complete Astrological Handbook for the Twenty-first Century"; Understanding and Combining the Wisdom of Chinese, Tibetan, Vedic, Arabian, Judaic, and Western Astrology.  Also, Qi Journal.

Posted by Diane Fergurson at 5:17 AM