I originally posted this recipe for Gluten Free Rice Krispy Treats on my blog, In A Creative Context, and it received so much attention I decided to share it again here.  Fast, easy, gluten and wheat free - this is an easy, delicious cookie to make this Holiday Season that everyone will enjoy!
~ diane fergurson


Ever since my daughter became gluten-free, I've been experimenting with different baking options.  I've found that introducing new flours into the diet and also experimenting with different leavening agents to actually be rather enlightening, as well as extremely interesting.  Since I've always enjoyed cooking, it's been more of a discovery of sorts.  Through this process I've also realized that for people with a yeast allergy (like myself) many of the foods and baking ingredients that you will end up cooking with and eating also tend to be gluten-free. 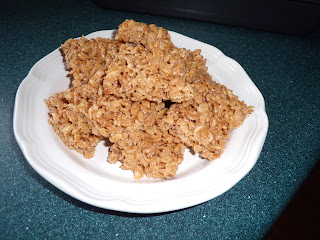 The other day I was trying to think of something simple to make, that would satisfy my sweet tooth, as well as hers, so I thought about some of the foods she use to like when she was growing up.  I decided to make some "Rice Krispie" treats.

It was pretty simple.  Instead of using the "normal" brand of cereal I used the Whole Foods 365 brand, Brown Rice Crisps (healthier).  The gluten-free marshmallows came from Whole Foods as well (in the baking department) - and I also noticed that they are Kosher.  So if you are looking for gluten-free marshmallows in a regular supermarket, if it has a Kosher section try looking there. 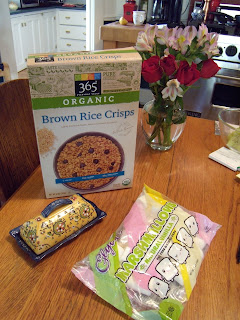 All you do to make the treats is melt 2 Tb. of butter together with the sack of marshmallows (7oz) in a non-stick saucepan.  Stir quickly.  When it is melted, poor the mixture into 6 cups of the brown rice cereal and "very" quickly stir it together.  Transfer it to a pre-buttered, non stick 9x13 pan and press down on the top to even it out.  One trick to do, is butter a piece of wax paper in advance and press down using it instead of your hands.  Cool and then cut into squares.  enjoy! 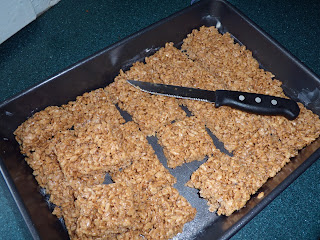 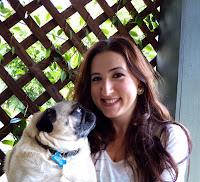 Follow our daily updates for the Mind Body Spirit Marketplace on Facebook.
Posted by Diane Fergurson at 5:26 PM