Duck, Bob And Weave: Mercury Retrograde Is Coming At You Again 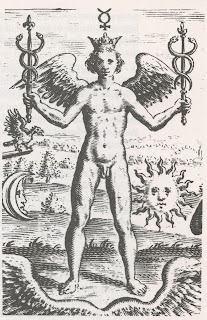 In the past I've written articles for our blog, and posted announcements on our Mind Body Spirit Marketplace Facebook Page about upcoming dates for Mercury Retrograde.  Well, the date is upon us once again for this Spring 2012 - March 12 through April 4.  This time it will not only be coinciding with Income Tax time, but also many "end of the year" dates for businesses.  So for those who have not filed your taxes yet, or to those of you involved in a "numbers crunch" for the end of your business year - um, good luck.

As concisely explained by author James R. Lewis in his book  The Astrology Encyclopedia:

“Retrograde refers to the apparent backward motion of a planet in its orbit. Because all planets in the solar system are moving in orbits of different sizes at different rates of speed, there will be periods in the orbit of the Earth when each of the other planets seems to reverse direction for a period of time. The effect can be compared with that of a jet as it passes a slower-moving airplane that is flying in the same direction at a lower altitude: As the pass is made, the slower craft appears – particularly when viewed against the backdrop of the Earth – to be moving in the opposite direction. Similarly, retrograde planets appear to move in reverse direction when viewed against the backdrop of the fixed stars.”

Lewis continues: “Astrologers tend to pay particularly close attention to the retrograde periods of Mercury, ruler of the Mind, communications, travel, and related matters. The period of Mercury’s retrogradation may be considered fortunate for introverted activities like reflection and meditation but it is considered unfortunate for traveling and making important decisions (e.g., signing contracts). Travel is sometimes delayed while Mercury is retrograde, and decisions made during such periods are often reversed after Mercury goes direct.”


I'm going to end this piece by saying that I always find it rather satisfying, but yet amusing when those who "don't believe" in astrology become introduced to Mercury Retrograde and all of a sudden start paying attention to the dates and the activities in their lives.  Then there's always a conversation that begins something like this:   "Hey Diane, when are those dates again"?


Regardless of what may or may not happen with Mercury Retrograde, keep your thoughts positive and enjoy your Spring.