Barbara Moore, one of the lead tarot scholars today, in cooperation with artist Aly Fell, has created one of the most unique decks I have seen in some time, The Steampunk Tarot. 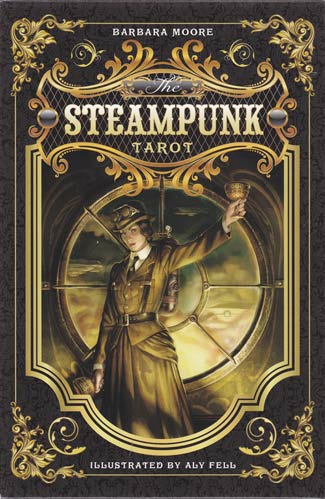 If you unfamiliar with steampunk, or for those who have heard the word but never quite understood what it meant, let me take a minute to get you up to speed.
Steampunk is a blending of science fiction, fantasy, and alternate history.  Some good examples are the kind of machinery found in the works of H.G. Wells or Jules Verne.    Victorian England, and The Old West of the United States, are two popular places used in steampunk fiction.  (Those of you who saw The League of Extraordinary Gentlemen or the Wild Wild West movie get the idea of what we’re describing here).  The wild contraptions and mechanics used are created with the idea that the the industrial revolution has already started, but not to the point where electricity has been developed, hence we have steam-driven vehicles and smaller devices using clockwork style mechanisms.
The clockwork mechanism aspects of steampunk are portrayed rather beautifully on the back of every card 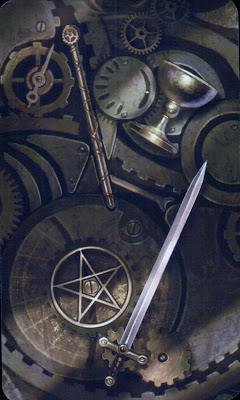 The Minor Arcana - Numbered Cards
For those of you who are well-versed in the traditional Rider Waite deck, this deck will be an easy fit for you, as the overall concepts are similar.  So, you will have a very small learning curve if you want to add this unique deck to your repertoire.
For those of you that are unfamiliar with Rider Waite, Barbara makes it very easy to study this deck quickly.  The accompanying manual starts off each card description with a simple quote, designed to get you to think about the card and its imagery.
Here we will look at one numbered card from each of the four suits. 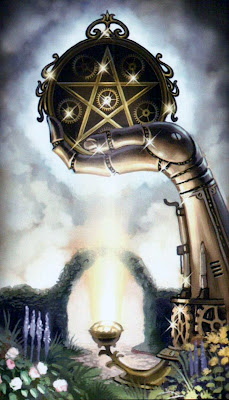 For example, the Ace of Pentacles is all about opportunities for prosperity.  The section on this card starts off with the quote “How does it feel to hold the potential of the world in your hand?”.  This concept is so beautifully conceived in the artwork of the card. One of my personal favorites is the Ten of Wands (a card that comes up in every single reading anyone has ever done for me).  The description starts off with the great quote “Which is more burdensome: that past that is known or the future that is unknown?”.  Many of the tarot decks I have seen show the person carrying the ten wands in front of them, or shows them grounded in some way.  What is unique about the Steampunk Tarot interpretation of the card is twofold.  First, this woman is carrying these wands (her “burden”) on her back.  Since these burdens are issues from the past, it only makes sense that they be behind her.  I am not sure why so many other decks have these burdens in front of the person.  Secondly, look at the cards strewn about her.  The ones behind her are face up.  These are the past, the things that are already known to her.  Now, look at the cards in front of her.  They are still turned down.  They are her uncertain future.  I have never seen this card interpreted in this way before.  This is a wonderful, powerful, image, and wholly indicative of the art and concepts of this deck. 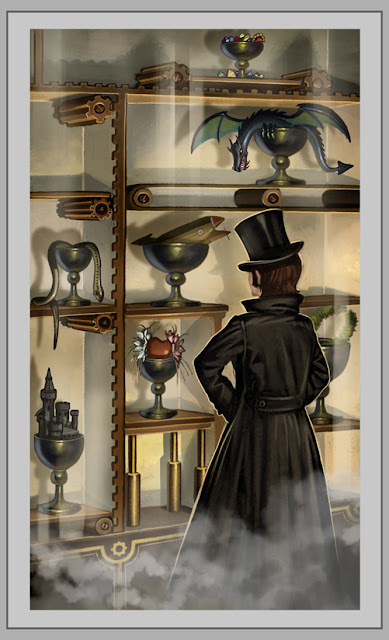 The Seven of Cups, with its quote “In this moment, all possible futures exist - until you pick one.” beautifully captures the concept of having many possible choices.  Each of the seven cups depicted on the card has a different item inside them.  They run the gamut from potentially positive to potentially negative.  There are cards of tangible items as well as emotional ones.  Some are grounded, and some are airborne.  The full range of choice is very well represented here. 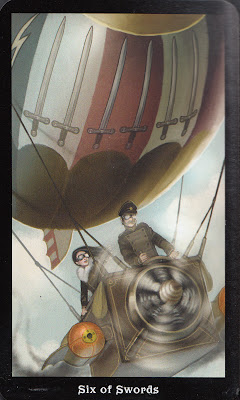 The Six of Swords (“A lady always knows when it’s time to leave.”) is another that wonderfully depicts its concept in a new way.  This card suggests that leaving the situation would be the best way to resolve it.  To illuminate this concept, we see the person on a flying machine.  To help illustrate the idea of “taking flight”, we can see that all six of the swords are pointing in the same direction, the direction in which the flying machine is headed.  As an extra bonus, the accompanying book suggests that, when doing a reading, if The Chariot of any Knights are also present in the reading, this should be taken as a sign that leaving the situation is all the more urgent.  A great tip!
The Minor Arcana - Court Cards
The court cards are where some this deck starts to set itself apart from other decks.  In this deck, all four pages and three of the four knights are depicted by women. 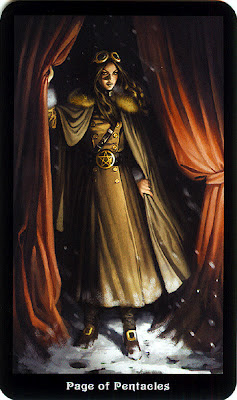 The Page of Pentacles (“Because adventure always awaits, and so I am always prepared.”) is ready for the next adventure.  She is showing emerging from behind a curtain.  This woman has prepared herself well, and is more than ready to take the stage and seize her moment. 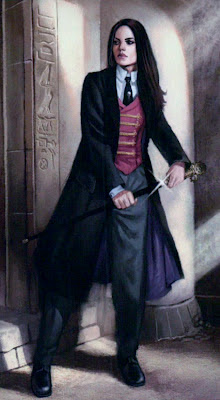 See how the Knight of Wands (“I assure you, I do not need to read those hieroglyphics in order to conquer this situation.”) holds her wand.  It is not held casually.  The way she is holding it, it can be thrust forward, thrust backwards, or held up in front of her to block a potential attack.  She is ready to take any action necessary.  She does not need a plan, does not to consider any past actions, and does not need convincing (traits of the other suits).  The sparkle emanating from the wand is almost akin to a twinkle in your eye.  Even the wand itself appears to be ready to act. 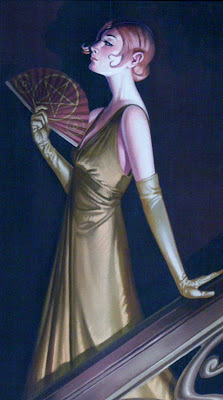 Perhaps the crown jewel of the court cards, the Queen of Pentacles (“Let your inner light be reflected in the outer world; loveliness is next to godliness.”) is the Grande Dame, and she knows it.  From her porcelain features, to her satin dress, to the gold banister, everything in the card just radiates.  And yet, notice how wonderfully simple the overall look of the card is.  She does not need any fancy ornamentation.  She knows that the simplest things just need to shine, to elevate themselves above the simple.  Also note that everything has a function as well, nothing is in excess.  She is unadorned elegance.
The Major Arcana 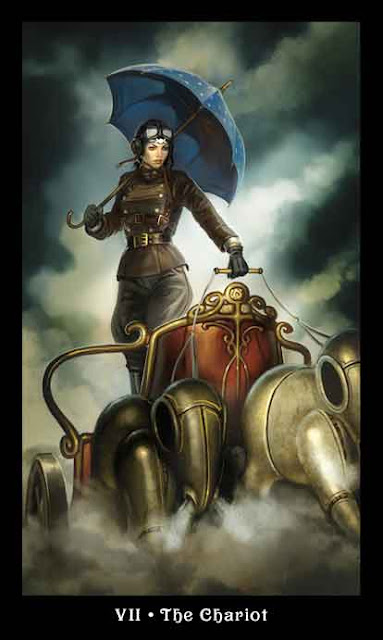 In The Chariot (“Despite any concerns you may have, I am in control of this situation.”), we see a person who is fully in charge.  They have control of the vehicle, and are leading it in the direction in which they wish to go.  There are several different Elizabethan and Steampunk literary series in which heroines carry parasols filled with unique gadgets and weapons.  This card is also a tip of the cap to those heroines.  It also employs a wonderful depiction of a steam-driven vehicle. 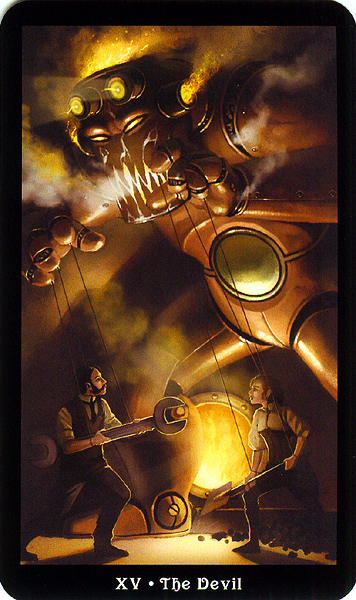 The Devil is one of the best images in this deck.  The machine, created by these people, has become so big and powerful, that is has taken complete control of the situation.  The people in this card are being controlled by the machine, and forced to continually keep it functioning.  The idea here is that whatever the situation is that you created, it is now to the point where you can no longer be objective about it, because you are too busy keeping it going to be able to step back and realize what is really going on.  You are too busy feeding the beast to see how much control it now has over you.  This is, truly, one of the best images in the entire deck. 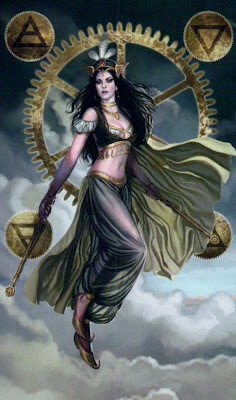 Lastly, we come to The World.  This woman has conquered everything.  Behind her are the symbols for Earth, Air, Fire and Water.  Unlike other cards of ending in this deck, this one is a more positive ending, as it depicts that the journey that she started was successfully completed, and that she is now ready for her next journey.
And, hopefully, with this deck, you too will be ready for your next journey.
The only concern I have with this deck is that the cards are just a little on the flimsy side.  I wish they had been made of stronger card stock.  When using these, I would shuffle them with great care.  But, that is not enough of a concern to stop me from recommending this deck.  This is truly one of the most beautiful decks I have ever seen.  With the popularity of the Steampunk Movement, I am surprised a deck as not reached the forefront sooner.  Thankfully, we have a scholar like Barbara Moore to bring her unique vision to this concept.  The accompanying manual has a lot of useful information on each card, and also shows you ways to reinterpret old spreads in a new way, to bring out the most in this deck.  Tarot collectors as well as Steampunk collectors will enjoy these cards for years to come.
Those of you who are planning to attend TeslaCon3 in Nov/Dec 2012 will have the opportunity to see Barbara Moore present this deck herself.  What a treat!
For more information on the deck itself, you can visit www.steampunktarot.com.
The Steampunk Tarot is published by Llewellyn Publications.
Enjoy!


Additional Tarot reviews by Giani can be found in the Review section of our blog.

Posted by Diane Fergurson at 6:12 PM