When Did You Meet? Attraction and the Zodiac's Chart Zones 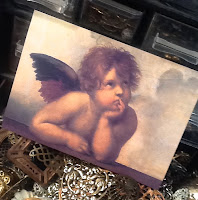 It's Valentine's Day - love is in the air, and this is probably one of the most popular times of the year for anything having to do with astrology and horoscopes.

In a recent article in Dell Horoscope magazine titled Cosmic Chemistry; The Zodiac's Laws of Attraction, author Sioux Rose reminds us that a person's relationship with their significant other is not only impacted by whether the individual signs are compatible, but also what  Zodiac sign was present when they first met.  In other words, if the couple meets in Taurus, the energy expressed will be quite different then if they would have bonded in Virgo.

I honestly had to go back and think about that one for myself - when did I meet my husband?  But when I finally remembered and checked with the information in the article, I was pretty surprised how accurate the author was about the nature of the union.

Below are some excerpts from the article.  For more in depth information I suggest you pick up a copy of the April issue of Dell Magazine for yourself.  While it is always wisest to consult the personal astrology chart as a whole, the way couples bond during the influence of specific signs is very interesting, and can certainly cast a new light upon relationships and how they function during this lifetime.
What you find out might surprise you!


- When Aries (March 19/20 to April 19/20) is the cosmic zone where the Sun and Moon or Venus and Mars unite, the couple will be blessed with the gift of innocence.  There is a child-like innocence to the way Aries approaches the world and everything in it. The karmic challenge here is what is inherent in the fire itself (Aries is a fire sign).  Fire can fuel or it can destroy.

- When Sun and Moon or Venus and Mars meet in Taurus (April 19/20 to May 20/21), the magnetic power of Mother Earth Blesses the union.  The Moon is exalted in Taurus, so that means there is an inherent stability built into the bond and it is not unusual to find couples working together or in business partnerships.  The two challenges that stand out in this cosmic bond are stubbornness (Taurus the Bull) and also overindulgence of sensual pleasures...such as over eating and partying too much.

- When the pair meets in Gemini (May 20/21 to June 20/21), there is never a dull moment.  Gemini is an air sign, and the couple will most likely find themselves on the move involved in all kinds of activities and social events. They will be interested and involved in many things during their lifetime.  This is a bond that thrives in a busy household.  The challenge in this relationship is to make sure that the individuals do not over compartmentalize themselves to the point that the work or social persona does not develop too differently from the private or personal self.  An example of this is the politician or business person who espouse values of one type, then act in a completely opposite way in their private life.

-  Attitude and emotions characterize a bond formed in Cancer (June 20/21 to July 22).  The dynamics of each person's natal chart come in to play (particularly aspects to the Moon), and according to the birth blueprint it will either activate or agitate the union.  Couples whose planets come together in Cancer need homes that are free of discord and a place where they can experience a shared state of security.  If too much stress is encountered inside the residence, it could lead to psychological or medical problems in one partner or both.


- When a couple meets under Leo ( July 22 to August 22/23), life becomes the great romance.  It may also become the "great comedy" or tragedy.  The dramatic plays a huge role for the Leo, and as with most things, and "All the World's a Stage".  The sign of Leo is about great creativity, so a union under this category also has the potential to catalyze many joint creative projects and ventures.  This sign also understands the hearts of children so any fusion centered in Leo should see children factor substantially into their lives.  Leo's tie to the Sun inclines those who hold this signature to spread the light of higher understanding.  Pride is the element that can work against it.

- A fusion focused within Virgo (August 22/23 to September 22/23) is apt to focus the couple on healing and therapy.  They want to help people live a better life and most likely will become involved with professions, interests or studies that reflect this.  Virgo is also a very work oriented sign.  They also take their work home with them as a result of their constant need for perfection.  Virgo's inferior mandate for order, added to the urge to fix, edit, clean organize or clear away, is always operating.  That makes it difficult for a couple to relax.  The key to this relationship is to turn recreation into a task, and Virgo will enjoy it.  A couple under this union could also be given to criticism, emphasizing each other's small flaws instead of enjoying the positive side of the relationship.

- Libra (September 22/23 to October 22/23) is the sign that is assigned to the realm of marriage, and it's a wonderful time for a couple to meet each other.  Libra is all about balance, and no other sign is as partnership oriented or more given to the needs of it's partner then Libra.  The most common liability from this union could spring from indecisiveness.  Libra also represents neutrality, so these couples often see the logic on both side of the question, and could become non active on issues as a result.  In other words, noting gets done.

- Scorpio (October 22/23 to November 21/22) is the sign of alchemy and transformation, and a fusion within this sign would result with a deep bonding experienced between partners, both physically and/or spiritually.  It is also the sign associated with regeneration and rejuvenation and couples who connect through Scorpio's Alchemy may also find this a theme throughout many varying aspects of their lives.  There is no sign that holds the lessons of forgiveness higher on it's karmic roster then Scorpio.  Depending on other aspects of the individual charts, Scorpio's retaliatory stinging tail could also cause major afflictions to those who meet under this zone.

- The Sagittarius (November 21/22 to December 21) fusion zone is full of optimism, hope, and a joyous sense of life's wonders and possibilities.  It is also the sign connected to the worlds of religion, academe and publishing...and couples who meet meet during this time may often find themselves connected within those areas.  Sagittarius is also a mutable sign, and mutable signs carry the karmic signature of inner division. Temperaments may ride high with exuberance, but they can also crash with dark moments of despair.  In other words, a rocky road of emotions may be the case with a couple who meets under this influence.

-  Capricorn (December 21 to January 19/20) is the sign directly ruled by Saturn, the zodiac's lord of karma, and any bond formed under this fusion is apt to be karmic, satisfying commitments and promises that were made in previous lifetimes.  It may also involve restrictions on one or both partner's lives.  The Capricorn fusion can be thought of as boot camp.  One or both partners may be strict in nature, or one partner could exert more control over the other.  The pair is also apt to focus particular goals, often professional, and their lives will serve to further those objectives.  If the other planets are supporting, this pair will often bond for life and the root that is planted will grow and prosper over their lifetime.   If both partners support each others goals, they could rise quite high in their respective careers and their relationship will have a very solid, enduring lifetime commitment.

- The Aquarian (January 19/20 to February 18) fusion zone produces enormous electricity.  This is the pair that everyone wants on their party guest list!  They can illuminate the room with their natural charisma, no sign is more gregarious.  What can happen under this influence though, is that both partners could become so popular that they have to schedule time just to be together and enjoy each others company.  Also one of the pair could shine more brightly then the other, be even more popular, and that could cause issues in the relationship too.

- Pisces (February 18 to March 19/20) is the last in the Zodiac, and this is where circle meets itself.  It is the sign of dreamers, and although hopes and dreams might be easier to launch from this zone, it's important that at least one of the partners be well grounded or both people will be caught up in an over sensitive, overt imaginative state of being.  The Pisces fusion zone unleashes a full spectrum of emotions, and among them the seductive allure of illusion.  Should one partner become swept up in into a pattern of addiction or escapist behavior, they may try to find a way to hide it.

Posted by Diane Fergurson at 4:27 AM