Mercury Retrograde, For Your Holiday Pleasure 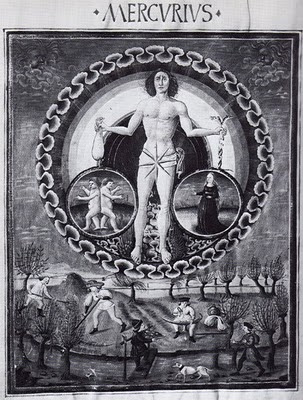 What is this astrological transit that always makes me glance over my shoulder and take an extra breath of patience (or just give up) when things aren't going my way? Read on and find out.

There are numerous astrological aspects which transit our chart every day, every year. Mercury going retrograde however, is one that has always caused my antenna to rise a little higher and pay a bit closer attention to the situations going on around me.
I grew up with a mother who was a student of astrology. Every time this aspect would approach she would begin her lengthy mantra warning me against signing important documents, beginning anything new, engaging in transactions, and of course...travel plans. Although she is in her mid 80's now, I fully expect a letter AND phone call this week reminding me about the transit. It's something she has obviously learned, by experience, to take seriously.
Perusing through my astrology books to prepare for this blog post, I came across a good description of Mercury retrograde by James R. Lewis in his book The Astrology Encyclopedia Here are some excerpts:
“Retrograde refers to the apparent backward motion of a planet in its orbit. Because all planets in the solar system are moving in orbits of different sizes at different rates of speed, there will be periods in the orbit of the Earth when each of the other planets seems to reverse direction for a period of time. The effect can be compared with that of a jet as it passes a slower-moving airplane that is flying in the same direction at a lower altitude: As the pass is made, the slower craft appears – particularly when viewed against the backdrop of the Earth – to be moving in the opposite direction. Similarly, retrograde planets appear to move in reverse direction when viewed against the backdrop of the fixed stars.”
Lewis continues: “Astrologers tend to pay particularly close attention to the retrograde periods of Mercury, ruler of the Mind, communications, travel, and related matters. The period of Mercury’s retrogradation may be considered fortunate for introverted activities like reflection and meditation but it is considered unfortunate for traveling and making important decisions (e.g., signing contracts). Travel is sometimes delayed while Mercury is retrograde, and decisions made during such periods are often reversed after Mercury goes direct.”

~ diane fergurson
About the image... This illustration of Mercury is originally from De Sphaera, an illuminated astrology manuscript from the Italian Renaissance.