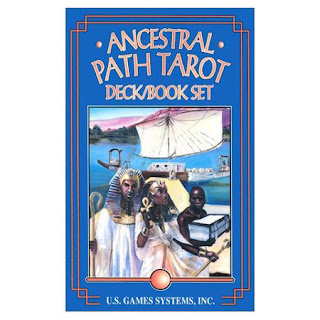 The Ancestral Path Tarot, artist Julia Cuccia Watts, author Tracy Hoover, publisher US Games
The Ancestral Path Tarot is one of the most unique sets of tarot cards I have ever seen. Usually, I see decks having only one common theme or look (celtic, fairy, gothic, etc). While The Ancestral Path Tarot does have its theme of the path you take (or may take) and the journey and evolution of problems and situations from their causes to their conclusions, what really sets this deck apart is that, unlike most decks, each suit in this deck has its own look and story.
In this deck, we are treated to four different cultures and eras. The Swords are based on Feudal Japan and Shintoism. The Staves are based on Ancient Egypt, specifically the 19th Dynasty of Ramses II (1304 BC - 1247 BC). The Cups are based on the Arthurian Legend and the Holy Grail. The final suit, usually referred to as rings or pentacles, is this time referred to as Sacred Circles, and is based on Native American culture. An example of each can be seen here:

By using four cultures from four different areas (one North, one South, one East, and one West) and four different eras, it does allow us to feel connected to the whole of existence. We are shown that, no matter what time you lived, what culture you belonged to, no matter who your ancestors were, we are all alike in that we all walk the same paths in the search for understanding. This is best represented in the 22 cards of the Major Arcana, which blend the images from all the suits together, leaving some to feel cross-cultural, some multi-cultural, and some with no culture. While the Major Arcana, on the whole, tend to stay close to the images tarot readers are most familiar with, there are a few exceptions. The most notable is The Hanged Man, referred to in this deck as “The Hanged One”. In this deck, The Hanged One is shown as an inverted fetus still in the womb, a most stunning image:

Another interesting difference between this deck and most decks is that in this deck, there are no reversals. Cards are only given one meaning each. I suppose an expert reader could interpret the reversals as they saw fit, however, for the beginner, this is a good way to get familiar with doing reads and learning the cards, giving them just the one meaning.
Speaking of experts and beginners, this deck appears to have been designed with both categories in mind. While, on the surface, many of the basic images are easy enough to understand, especially for those with experience with other decks, if you look closely at many of the cards, there are tiny details you might overlook. The experienced eye and reader will be able to add these images for a much more layered and in-depth analysis. The idea that you should look deeply into the hidden symbols and images is portrayed almost tongue in cheek by the creator of the deck. In The Fool, she actually uses her own image for the card:

However, if you look closely, you can see that the card she is holding up is The Fool, and it has her image on it. That kind of “image within an image” is an invitation to observe the cards very very closely, and down to the most minute detail. Experienced readers will find many tiny, almost hidden images within the cards, allowing you extra layers with which to do your reading.
This deck also offers up new spreads for these cards, as well as new takes on classic spreads. Two new spreads work very well. The first is a Direct Path Spread, in which cards are laid across the table in a line (the photos shows it isn’t a straight line, as most paths wind a little, so some cards are slightly higher and slightly lower than others. This spread is used to show the progression of a problem, issue, or decision from its history, to its current path, to its conclusion, ending in a springboard to the next circumstance/problem/issue/path.
The other new spread worth mentioning here is a Fork In The Road Pattern, in which, after laying out a card for the influences on the issue, and the current state of the issue, the reading breaks off into two forks, giving you two possible paths and two possible outcomes, so you can see the progression and consequences in each of the two choices you face in resolving your question. Seeing both paths, and both possible outcomes will give you a better insight into what your decision will be.
The imagery in this deck, combined with the uniqueness of the four cultures in the four suits makes this, truly, one of the most beautiful and unique decks I have ever seen.
For further studies into tarot reading, I recommend the books currently sitting in my reading/study pile:
The Tarot Bible, Sarah Bartlett
Learning the Tarot, Joan Bunning
Understanding the Tarot Court (from the “Special Topics in Tarot” collection), Mary K Greer & Tom Little
The Complete Book of Tarot Reversals (from the “Special Topics in Tarot” collection), Mary K. Greer
Designing Your Own Tarot Spreads (from the “Special Topics in Tarot” collection), Teresa Michelsen
-------------------------
Thank you to Giani for this great review

You may also enjoy:
Sun and Moon Tarot Review
Vampires of the Eternal Night Tarot

Posted by Diane Fergurson at 12:52 PM