An Introduction to Tarot 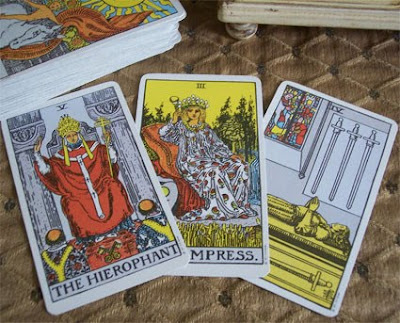 Tarot has been a part of my life, to some degree or another, since I was thirteen or fourteen years old. My first deck was given to me by a friend of my father’s – she was a reference librarian I also knew from her regular “shushing” of me and my friends. She adored B. Kliban cats, watched British comedies, and sang in the choir of her Episcopalian church. She was not exactly the kind of person one might expect to gift young teens with tarot decks. But, the truth is, tarot is often misunderstood, and those who have an interest in it often fall into some pretty silly stereotypes.
When you think of tarot, you might think of cards you have seen in movies or TV shows. Often revealed by a fortune teller wearing jingly bangles and colorful scarves, are the Death card, the Tower, perhaps the Hanged Man or Three of Swords. Any cards that have ominous illustrations are favorites, because they tend to elicit a gasp, as well as immediate fear for the character receiving the tarot reading.
Although the suspense may be engaging, this portrayal of tarot is off the mark, unless at a carnival or festival when one is looking for mere entertainment. Tarot today is not generally about fortune telling, and is more often found in the offices of forward-thinking counselors than it is in the exotic tents of “gypsies.”
Far from spooky, the tarot is simply a deck of seventy-eight cards (the number of cards may vary), illustrated with images full of symbols that evoke response. Our response to those symbols may be emotional or rational, based on personal memory or experience, on what we have learned, or on societal conditioning. Additionally, symbols in tarot generally do carry with them rather specific meanings that we should take into account. For example, a star symbol will be recognizable to all of us – for each person, the symbol will have its own meaning – or perhaps none at all, which might affect how we feel about the card. But, appearing on a tarot card, a star will also have its own meaning, or meanings… depending on what the designer intended, as well as what it might mean historically and metaphysically.
Tarot today can be helpful in sorting out our personal messes, to put it rather bluntly! Turning to the cards is simply another way of gathering some advice – advice that we find in reflecting on symbols and images that are often cross-cultural, and therefore somewhat universal and timeless. This symbolic language makes sense to us. We can find meaning and insight in the cards that can help us make decisions regarding our daily lives. Readings can help us gain understanding about ourselves and the challenges we face. I personally do not believe there is any power to the cards – the power to discern and interpret meaning is our own, the power to apply what we learn to living better lives, is also our own.
If you are interested in learning more about tarot, I’d like to suggest some books you might enjoy. We plan on offering a blog series on tarot here at Mind Body Spirit, so please let us know if there are any specific topics you would like to see discussed.
Recommended Reading:
Seventy Eight Degrees of Wisdom by Rachel Pollack is an in-depth exploration of tarot that is accessible to beginners, and it offers significant insight to seasoned practitioners as well. Another book by Rachel Pollack is Complete Illustrated Guide to Tarot offering a general outline of tarot, the history of tarot, standard meanings of each card, and ways to use the cards in readings.
Mary K. Greer’s Tarot for Your Self is a workbook designed for the beginner. If you like learning through self-directed exercises, this may be just the book for you.
Pictures from the Heart – A Tarot Dictionary, by Sandra A. Thomson, is a great book to have on hand to look up the possible meanings of specific symbols on the cards.
~ Nellie 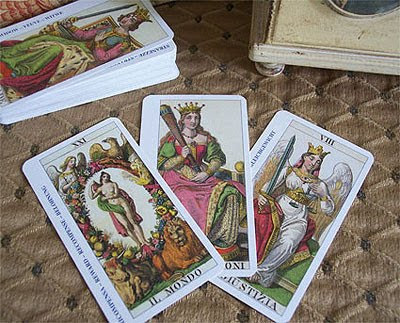 Posted by Diane Fergurson at 12:11 PM