Gazing Into A Crystal Ball

Visiting the Penn Museum at the University of Pennsylvania Museum of Archaeology and Anthropology had been on my "must do" list for quite a few years.  Founded in 1887, this museum has one of the most substantial collections of Egyptian architecture on display in the United States.  A 13-ton red granite sphinx, the third largest in the world, even dominates their gallery.  But...that's another blog post for another time! 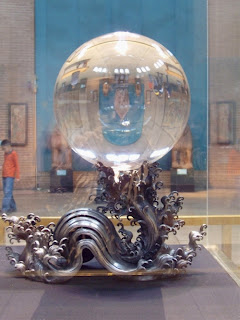 When I recently read the wonderful reviews of the Secrets of the Silk Road exhibit that is currently at the museum, I decided it was definitely time for a visit.  My son went to college in Philadelphia and had visited the Penn Museum a number of times.  He always loved it.  So, I asked him if he would like to join us.  The first thing he said was, "Oh Mom, you know that the Penn Museum has the second largest crystal ball in the world...  It's really cool, I know you'd just love it"!  No, I didn't know anything about the crystal ball... but after he said that I couldn't wait to see it!

The "crystal sphere" was a treasure of the Imperial Palace in Beijing.  It is said to have been one of the favorite possessions of the infamous Qing dynasty Empress, Cixi (1835 – 1908). Cixi was a concubine who rose to the position of Dowager Empress during the latter part of China’s Qing dynasty (1644 – 1911). The end of the Qing dynasty was a period filled with economic and political distress, and Cixi was not exactly loved or revered because of her lavish tastes and luxurious lifestyle.  As a result, when imperial China crumbled her palace was ransacked and she fled Beijing.  Many of her precious belongings were stolen and dispersed.  Among her possessions was a flawless, crystal sphere – believed to be the crystal sphere now owned by the Museum.

The Penn Museum acquired the crystal sphere in 1927 when Eldridge Reeves Johnson, a benefactor of the Museum, saw the sphere for sale at the John Wanamaker store in Philadelphia. Johnson bought the sphere for $50,000 and donated it to the Museum when he died.  The crystal sphere stayed without incident at the Penn Museum for 61 years until it was stolen in 1988.  How it was stolen and by whom is still debated, but the piece was eventually traced to a private home in New Jersey and returned to the Museum. 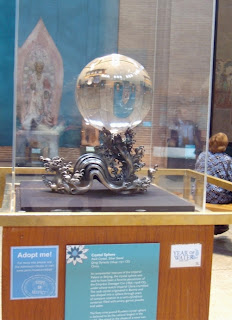 The crystal sphere weighs 49 lbs. It is completely flawless and it really is believed to be the second largest crystal ball in the world.  The stand that the sphere sits on replicates the shape of a wave and was created by a Japanese artisan.  The rock crystal originated in Burma and was shaped into a sphere through years of constant rotation in a semi-cylindrical container filled with emery, garnet powder and water.

Viewing the crystal sphere was pretty interesting.  What struck me the most is that every image reflected in it was upside down.
When I went home I decided to research more about the history of the sphere and also find some additional information about crystal balls in general.

The following excerpt comes from a wonderful resource book:
The Element Encyclopedia of the Psychic World by Theresa Cheung.  If you ever have a chance to obtain this book for your library, I would highly recommend it!

"A tool used to help diviners go into a psychic trance , the crystal ball is perhaps the classic and best-known method of divination.  Most people assume it is the ball that has the power, but is does not.  The secret is not the ball but the technique of scrying, which involves keeping your eyes open while staring into a shiny, reflective surface to induce a form of meditation or self-hypnosis - the prime state for opening awareness to clairvoyance and psychic insight.

Scrying and crystal gazing practitioners were found in ancient times throughout Mesopotamia, among the Druids and other peoples of Europe and in China.  Modern scryers  most commonly use crystal balls that are usually three to six inches in diameter.  The ideal crystal ball is made of quartz, not glass, because quartz crystal is thought to increase psychic energy".

You may also enjoy:
The Sun and Moon Tarot Review
Book Review:  The Pagan Mysteries of Halloween
An Introduction to Tarot