The Pagan Mysteries of Halloween
By Jean Markale, published by Inner Traditions 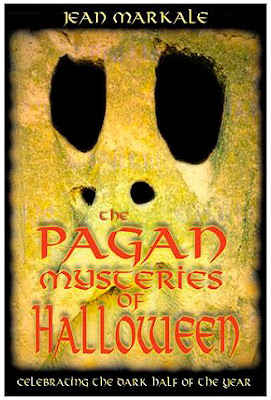 It is early autumn and the days are cooler, the air crisp, and night arrives more quickly. I have pulled my sweaters out from the closet and am wearing long velvet skirts. The food I buy at the farm stand is round and orange or yellow, and satisfying in a very earthy way. It is harvest time, the fields will soon be bare and most creatures will be inside somewhere (house, barn, nest, den). We are entering the cold, dark half of the year.
It is this half of the year that Halloween welcomes in, and it is these aspects of it that inspired celebration among the Celts, hundreds of years ago. As a largely agricultural people, the Celts relied much on their farms and livestock. They prepared themselves every Samhain (the original name for Halloween) for the colder months, for dwindling food and slowing growth, and for a change in daily lifestyle. It made sense to them to also conduct business affairs on this holiday, because to them, one year was coming to an end (with the finality of harvest), and another one was being conceived in the dark womb of nature. Author Jean Markale explains:
“A shepherd people, raising cattle for milk products and meat, and raising pigs, a food favorable for procuring immortality – such are the Celts, or, at least, such are the Gaels of Ireland, the Celtic people who have most authentically preserved their original traditions. Under these conditions, one cannot help but comprehend the dating of this people’s principal holiday on the full moon closest to November 1. This is the end of summer, when it becomes important to protect the herds – of cattle or of pigs – that constitute not only the wealth but also the survival of the community. … There is, however, one fact for certain: within the framework of an essentially pastoral society, the holiday of Halloween, heir of the Celtic Samhain, is perfectly at home in the calendar at the end of the summer and the beginning of winter, in the specific neighborhood of November 1.”
In addition, it was a time of shifting thresholds. The interplay of day and night, light and dark, fertility and dying away brought with it a spiritual note. Lines could be crossed, from the seen to the unseen, and vice versa.
The Celtic holiday of Samhain, originally longer than the one night of modern Halloween, was a time of heady brews. One might get wildly drunk, but for the more serious purpose of rising spiritually higher. Deals were made, between partners, between the living and the dead, or the mortal and the immortal.
“Samhain thus concerns a complete festival, during which the religious element permeates all manifestations, even those that appear to be most profane, because everything paradoxically leads to a vision of the invisible world. In some way, the festival reduces death to the state of nothingness, even if usually there is a separation between the living and the dead. During the time of Samhain, humans see the dead who have temporarily lost their gift of invisibility. We find these beliefs again in the Christian All Saints’ Day and the carnival-like rituals of Halloween, although they deviate somewhat from their precursors owing to the slow but steady evolution of spirituality during the early days of the Celtic people’s conversion to Christianity.”
This fantastic holiday, like many other pagan traditions, influenced Christian practice as Christianity spread through Western Europe, especially Ireland. The symbols we have for Halloween today - the brightly sinister jack o'lantern; the gaudy, ghostly costumes; and laughing witches on brooms, are the result of a gradual evolution of this important, ancient festival.
Through Markale's book we can find the real legitimacy for Halloween as a holiday. It is not simply about children traipsing from door to door looking for candy (or else! Trick or Treat!). It is not simply about a reverence for ancestors, or a time to let go of all inhibition. There is a reality to it that gives it a deeper presence, and which beckons us to seek its true meaning, in addition to its true history.
Jean Markale's telling of many traditional stories illustrates this history vividly and causes us to reflect on the essential nature of the holiday. Identifying, through Markale's exploration, with our pagan ancestors, gives Halloween the serious reflection it deserves. We can look now at this black and orange night and see beneath the mischievous spectacle, a holiday of changes, of reverence, of comprehension and wisdom.
This book is not always an easy read. Translated from the French, some of the writing is dry and a little stiff.  It educates more than it entertains, and informs more than it inspires. There are no fun spells to be learned here, no spooky games, and no popular tales of hauntings – as there might be in other books on the holiday. But, it is a good thing to learn the original meaning and power of our holidays, I think. The Pagan Mysteries of Halloween shines a broader light on a very popular and generally lighthearted holiday, giving it more meaning and form than what we are accustomed to.
~ Nellie Levine
http://northernskystudio.com/