When Karen Casey Smith designed the Black and White Mandala image for our interview with Jovita Wallace, she told me that it reminded her of Wu Chi....the Chinese creation story.  She then sent this piece to me along with her description.  It was so beautiful that we wanted to post the story with the image. Thank you Karen! 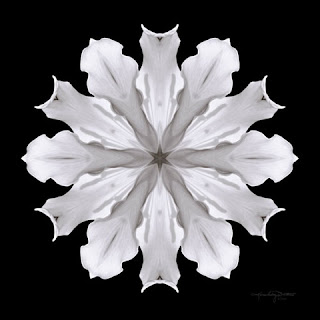 "It looks like creation... light, springing from the void, and brings to mind the Chinese creation story. Wu Chi (the infinite, potential) moves and gives rise to the Two, Yin and Yang (Tai Chi), which gives birth to the ten thousand things......."  ~ Karen Casey-Smith

Before the universe was created, there was nothing at all.  It was unnamable and beyond description.  There was no heaven, no earth, no sound, no smell, no color, no appearance.  It was in a state of chaos.  It is called Wu Chi.  Literally, it means “No Limit”, or “Ultimate of Non-Being”.  It may also be taken to mean “Absolute Infinity”, or “The Infinite”.
Wu Chi is the subtle origin of truth, the source of all creation, the fountain of all lives, the root of the universe and the mother of myriad things, therefore we call it “Tao”, the “Absolute Way”.

Wu Chi is the substance of Tai Chi. When Wu Chi moved it became Tai Chi. So Tai Chi is the function of Wu Chi.
In the Song Dynasty, the philosopher Chou Tun-I (1017-1073 A.D.) designed a diagram to represent Tai Chi in an ingenious way.  That is, with a circle (O) to represent Wu Chi in the state of calmness.  When it starts to move, then Wu Chi becomes Tai Chi. The circle was divided into two equal parts by a wavy line (

).  So Tai Chi is the integration of Liang I (Yin-Yang) and the mother of heaven and earth.

From Ch’ang–Shih Tai-Chi Ch’aun: The Ultimate in Health and Self-Defense by Frank DeMaria

You may also enjoy reading:
From Jing to Qi to Shen:  An Interview with Healer Darren Orr
A Taoist Perspective of the Earth on Earth Day